Five  Stars out of Five

There are some aspects of “Silent City” that work well for a detective mystery. Foremost is the setting. Murder and Miami spring “Dexter” to mind immediately, colors and vibrance of a shiny city. The Miami here goes beyond that cliché to something darker. The novel is also economical in its writing, scenes are not wasted, and the story stays moving at a good pace through a short read. Moments of inaction (particularly the start) are helped in that Segura creates an interesting protagonist in Pete Fernandez, a man lost in depression, digging his life into a deeper hole, a very unwilling and naive detective.

The problems with “Silent City” ironically stem from some of these potential strengths above. Pete Fernandez is interesting because he is such an ordinary guy, not your typical detective. This is a nice change from the witty, brilliant, and generally lovable hard-boiled detectives of noir. But without that ‘performance’ from a witty protagonist, a Marlowe or a Spenser, there needs to be something else to really make the novel captivating or enjoyable. For “Silent City” there just isn’t. It’s economical in construction, but thereby becomes very standard and predictable. Nothing comes as a surprise. Fernandez is so ordinary that he becomes dull, so clueless that the reader figures things out well before Pete happens to stumble upon the truth. He is so hapless that it simply stretches disbelief to breaking that he wouldn’t be executed by the killer almost immediately.

The setting, culture, and language of Segura’s debut novel are great, but “Silent City” is missing any element to really set it out as a noteworthy mystery or thriller, the sole novelty of its protagonist sadly dissolving with nothing to support it into the predictable plot, becoming a bland paste.

Two Stars out of Five 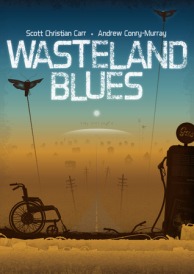 The only thing I didn’t enjoy about “Wasteland Blues” is that it ended, just as my interest continued to grow and grow. ‘Leave them wanting more’ I guess is the phrase that Carr &Conry-Murray are putting into practice here. And honestly this sort of surprised me from where I came from starting this novel.Reading the opening chapters my response was rather luke-warm, the post-apocalyptic situation seemed so very familiar, and the plot seemed pointed squarely onto a simple quest with cut-out characters, which ranged from crass to dim to impotent. I knew ‘apocalyptic’ was a genre of story I adore, and even something run-of-the-mill could provide some entertainment, but I was eagerly looking for something more, something that set this apart.

Joyously, the book grew on me quickly, the characters turning deeper than I expected, the plot turning inward and becoming more about the journey and its diversions than that bright far-off quest goal, and intriguing elements introduced that aren’t simple post-apocalyptic tropes. This turnaround in my response is a testament to how well this novel is plotted. With Carr’s background in TV, this strength is understandable in hindsight. The novel unfolds as if it is on the screen, drawing the reader into this world bit by bit, making us start out curious, hating the characters one moment, only to find some part of them that draws our sympathy instead the next. Each character is clearly a ‘type’, yet the majority of them are rounded enough to show struggles and depth, hints of what made them act the way they are, and that perhaps there is more to them beneath the exteriors they parade. As the core cast of characters continue their journey new faces are introduced, each more fascinating than the next, adding further dynamics and threads to the tale.

In terms of style the writing reminded me most of Stephen King, with its moments of humor, absurdity, rage, and general off-kilter characters. Despite being written by two men, the novel maintains a unified voice, and I can see how (as the introduction posits) the two authors complement one another to reach a fine balance in tone. At first, despite the post-apocalyptic setting, the story appeared to have more elements of fantasy to it than science fiction. This feeling in style occurs easily in the genre what with humanity often being pushed back in terms of civilization and technology due to the ‘Collapse’, ‘Devastation’, ‘War’, etc.

But again, it is as if the authors were delighting in throwing the reader off-balance, for elements of science fiction and technology entered into the story in the latter portion of the novel, in unique and intriguing ways, leaving one to wonder what additional surprises may be in store with any future visits to this universe. These portions of the story may come from the influence of Conry-Murray, but regardless of the source, they make for a well-appreciated infusion of science and technology into a wilderness tale.

Which brings me to the downside to this novel, the end. As the pages remaining grew few, I realized that there was no way the plot would be able to wrap up in the sense that their quest, their journey could not possible conclude. Why end the novel now, after one diversionary episode in this grand adventure? Why now, rather than the previous one…or the next? Simply enthralled with the ways the story was going I didn’t want the ride to end, and forgot for a moment that there is more to “Wasteland Blues” then the simple quest plot and its initial set up of simple characters. The diverse characters, each very separate individuals, after their own personal goals, were now at this point an actual family of sorts, an actual traveling group with goals more in common than they may have originally suspected. The most twisted and volatile character has had moments of genuine reflection and calm. They have grown into something, and in a sense, it makes perfect sense for this segment of their overall journey to end at this point where they have reached something substantial, maybe not in plot, but in their own personal characters.

“Wasteland” isn’t fine literature, it isn’t some staggeringly insightful commentary couched within a post-apocalyptic symbol. But it is a solid and engaging journey of reading in the genre, with a bit of depth, some interesting innovations, good laughs, and a ton of heart.

Five  Stars out of Five

“The Civil war has ended but not because the South surrendered, instead it’s on hold while both sides face a new enemy—the chewers, dead men who’ve come back to life. Cyrus Joseph Spencer didn’t fight in the war and couldn’t care less about the United Nations of America that resulted from it. His main concern is making money and protecting his crew from all manner of danger. But when tragedy strikes he’s forced to take shelter onboard a dirigible piloted by the U.N.’s peace-keeping force. It’s soon apparent that many more dangers are lurking and Cyrus must decide whether to throw in with strangers in a desperate bid to protect the country or cast off on his own.” – publisher description

A quick read that surprised me in how much I enjoyed the ride. “Odd Men Out” largely works positively because Betts appears to have had so much fun writing it, and such an endearment for fun pieces of genre fiction from sci fi to horror. Mention of Mystery Science Theater 3000 in the introduction to the novel got me excited and hopeful; entering into the story fulfilled those emotions, Betts manages to keep the story serious enough in tone while still having a lot of fun poking at troupes and throwing in amusing references. One lovely pun in reference to “Jaws” made me chuckle for a while.

As others note, the novel is a hodgepodge mix of genre elements from apocalyptic to alt history, to steampunk, to B movie monster movies, and on and on. What makes this work is that Betts keeps the same tone throughout and above all the same style. Despite many elements, the book at heart is a simple adventure story, full of action and crisp writing. The story, and its execution are just simply fun.

What disappointed me about the novel was firstly that it is too short. Some portions seem rushed, with action taking place off-screen that I would’ve been curious to ‘see’. Betts could have also used some more room to get in better characterization (without losing the story’s pace and pulse). At the end of this I have a vague sense of who the characters were – as in their ‘role’ to the story. Their identities, however… What really makes them tick and unique… not so much. In addition their interactions – particularly in the romance aspect – is predictable, clichéd, and thus kind of lifeless. Obviously though, these sorts of issues aren’t what’s at the forefront of a book like this, so while I could imagine it being better, these disappointments didn’t seriously detract from the entertainment at its core.

Despite how much I enjoyed it, this isn’t the type of book I’d normally first go to and pick up cold without knowing the author or trusted reviews. I had entered a previous giveaway from the publisher, Raw Dog Screaming Press, a title I actually was more interested in from the blurb. Failed to win that, but at the time I had looked into the publisher and their entire independent catalog I was intrigued. When I saw this from the same publisher I signed up more to see one of their titles moreso than this particular novel. I’ll gladly seek out future works by Betts though, hoping they’ll keep the fun and magic with improvements to boot.

I could never afford to get lots of their releases, (being independent small press, they aren’t likely to be easy to find second-hand) but I would also be willing now to try ones at full price that did look good. Normally I wouldn’t comment on price and construction like this, but this book is also one of the sturdiest and nicest paperbacks (trade) that I’ve had, and for once I’d consider the full price of a trade paperback to be worth it. I carry books around all the time, on the bus reading to work, etc, and usually they become bent, scarred, creased, despite my best attempts at keeping them pristine. This kept its corners rigid, had no easy creasing, etc. I was so impressed I thought I should say something.

It should be easy to tell if you like this kind of book: the genres, the easy reading, etc. If you do, definitely try getting ahold of a copy. Then watch some MST3K, you’ll be in the mood assuredly.

Four  Stars out of Five

While merging this review from Goodreads and adding a publisher link I noticed that Odd Men Out has garnered some award nominations. Check out the news here.