An unknown assailant stabs cold-case detective Lauren Riley at her desk late one night as she works alone in a Buffalo, NY Police Department. Barely surviving, and awakening in the hospital, she remembers only one clear detail of the man who attacked: he wore department issued uniform boots. Lauren soon learns the motive for the attempted murder by one of the department’s own. The cold-case murder book, the paper and photographic trails of outstanding murder investigations, is gone. Though her partner Shane Reese tries to ensure she recovers from near death, Riley instead becomes intent on discovering who assaulted her, and why they needed the murder book so badly. Discovery of a recent anonymous phone call to a now-defunct police hotline leads Riley to retired detective Charlie Daley to help track down a frightened witness who may have reawakened secrets thought covered up long ago.

I discovered The Murder Book, second in Lissa Marie Redmond’s Cold Case Investigation series, after happening upon the author at a signing at Barnes & Nobel. I’m always hesitant to start a new series, but I’m also one to welcome kismet and give support to a local author when it seems like a book I might enjoy. Often it ends up being mediocre, but I happily tore through The Murder Book and have now ordered the first novel in the series.

There’s no shortage of mystery series out there, so the successful ones need to have something unique to set themselves apart, some sort of charm to endear themselves to readers. Most often authors accomplish this with iconic characters or setting, building a recipe that offers the familiarity of routine, spiced with something quirky or exotic. They also must offer entertaining stand-alone stories that still propel longer character arcs and an expansion of the cast and scenery. During this the writer needs to somehow pull off the trick of allowing their heroes and villains to develop, but without the essential nature of those characters to be altered.

Redmond’s professional background imparts the first special quality to her series. As a retired cold-case-homicide detective, Redmond has the expertise to infuse her plot and dialogue with details of authenticity. Set in Buffalo, the series contains local references that some readers might also appreciate. This aspect initially attracted me to wanting to read it, but I soon realized most of the references fall in the Southtowns. It might as well have been set in Boston, like a Spenser novel, for the lack of the familiarity I have with anything down there. Nevertheless, these details still provide a lived-in atmosphere to the setting that mystery series are known for.

Though it may be simplest to categorize the novel in the ‘mystery’ genre, The Murder Book isn’t the kind of story where the reader should search for clues to figure out ‘who done it’. Instead it could be more precisely characterized as a police procedural, about the investigative steps taken by Riley and her associates to bring her attacker to justice and resolve the old case that instigated the theft and her attack.

Like a procedure, Redmond writes with an instinctive, logical style that forms a well-crafted linear plot built from strings of revealed facts. While the identity of her attacker is at first unknown, Riley discovers his identity, and the gist of his motive, with relative ease. Rather than through the thrill of following that mystery, reader captivation arises through the intricacies of what Riley does once armed with her knowledge, the answer to those mysteries. Riley and her associates may know the truth, but that is far from sufficient to bring charges, close a case, or deliver justice to victims. The focus of this story is on how Riley and her associates can find a way to get the evidence they needed to prove who has stabbed her, and why it was done. One might think that the details of closing a case could get boring, but Redmond keeps the procedural aspects engaging by keeping the dangers to Riley ever-present. Knowing the identity of the person who stabbed her doesn’t help her much if they remain free and a threat to her. If anything, the tension gets worse as Riley knows more, but still feels vulnerable. Seeing how she overcomes that to outsmart the criminals and overturn power differentials fueled my enjoyment of The Murder Book

Starting with Riley, a cast of complex, fleshed-out characters makes Redmond’s job of holding reader interest easier too. On top of being at physical risk from her job, Riley also has a history of dealing with troubles in her personal relationships. Frustrated with herself over her attraction to the wrong men, Riley has an ex-husband who still induces sexual tension, and an abusive ex-fiancé. Yet, with the support of her daughter and other family members, Riley keeps finding an inner strength and stubbornness to keep going, unapologetically, to meet her challenges and surpass them. A good male support in her life is her devoted partner Reese, and the natural banter that flows between them makes their platonic relationship a big strength of the series. You actually get the sense that Reese has his own personal faults, and isn’t an ideal guy for a romantic relationship either, consistent with Riley’s attraction to, or connection with, a certain kind of guy – even if just in friendship.

Daley, the retired detective also provides a nice addition to The Murder Book, a voice of age and experience who is able to connect Riley and Reese to parts of Buffalo that normally keep distance from the police. I’m hoping we’ll see more of this character in the future, his maturity and realism allow a great perspective, connecting the detectives to not just elements of the criminal underbelly of the city, but also to economically marginalized communities who may fear police for very good reason. This latter theme ends up being a major component of the plot, and Redmond deals with it extremely effectively.

However, the most fascinating character for me is David Spencer, a client of Lauren Riley’s side-job, whose story picks up from the main plot thread of the first book of the series. Though she began defending him, Riley is now convinced that Spencer has gotten away from murder. Though she has parted ways from her former client, he continues to appear in her life, as if taunting the truth about him that she knows. Dangerous and intelligent, Spencer represents something Riley shouldn’t want anything more to do with. But, his put-on charm and his perseverance at playing a sick game nonetheless draws her attention back in, holding hope that she might get proof of crimes that can put him away.

Even though I haven’t yet read the first novel of the series (A Cold Day in Hell) that unfolds this history between Riley and Spencer, I had no problem picking up on its highlights in relation to the main and sub-plots of The Murder Book. Moreover, it hasn’t detracted me from wanting to still read the first book, even knowing where it goes. Spencer represents a perfect series-long antagonist who will continue to plague Riley & Reese (and please readers) through future installments with his wicked genius. A Means to an End, the third book in Redmond’s Cold Case Investigations series comes out in September, but there is still plenty of time to dig into either of the other two meanwhile. 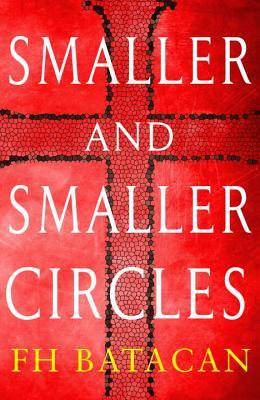 Set in the slums of Payatas, just outside Quezon City of the Manila metro area, Batacan’s Smaller and Smaller Circles is a bit of a contradiction. On the one hand it is rather unique: a crime procedural novel written by a Filipino author with a plot steeped in local politics and culture, and featuring two Jesuit priests committed to identifying a serial killer preying on the indigent tween boys living amid the neighborhood trash warrens. However on the other hand the novel is exceptionally ordinary: routine in its text and familiar in its protagonists, antagonist, and suspense despite the unique setting and perspective.
–
As a respected forensic anthropologist, Father Gus Saenz serves as an asset for the National Bureau of Investigations, particularly surrounded by the corruption of local police and his personal connection as priest to a flock living in abject squalor. Together with his psychologist protégé, Father Jerome Lucero, Father Saenz begins to investigate the appearance of eviscerated young local boys, seeking an end to the horrible crimes of an apparent serial killer and justice for the victims, vulnerable members of humanity that their society would rather ignore.
–
Most significantly, I found descriptions of local atmosphere lacking in Batacan’s writing. Though descriptive passages are present, the large chunk of Smaller and Smaller Circles consists of dialogue and stage direction. This is typical in crime novels, but unlike something like Hammett, Batacan’s dialogue and focus on the mundane seems remarkably tedious. To be fair, other readers may see this type of realism to be refreshing, and it may draw them into the story more than it did in my case. Given the expectations I had in viewing this book as a rare Filipino literary take on the crime genre, I was left wanting much more.
–
More about the procedure of investigation, the novel can’t really be described as a mystery, as the identity of the killer is not something the reader could arrive at. Yet, there is the element of discovering the killer’s motivations behind the gruesome murders. Again, as with the sociopolitical commentary provided by the setting, the psychology and past of the killer is an aspect to Smaller and Smaller Circles that holds so much untapped potential. Just as Batacan doesn’t pursue the politics of her novel to much depth, so too is the serial killer’s psyche not fully explored. Moreover the ‘reasons’ for the killer’s impulse never believably syncs (in my mind) with the details of the murderous acts.
–
Identification of the serial killer and the ultimate conclusion to capture them proceed with little twist or surprise, and the reader will likely realize how the killer gains access to victims before the Jesuit pair. This slow predictable plod to resolution, coupled with the unremarkable dialogue, made this hard to get into. Certainly not badly written, fans of police procedurals may still find something to enjoy in this novel, particularly if they appreciate the genre familiarity within a slightly unfamiliar setting. Plenty of readers have connected with Smaller and Smaller Circles, and depending on your interests/expectations you might too. But my expectations for something really new and different were unfulfilled.
–
In an odd convergence this is actually one of two crime novels I’ve just read featuring Jesuits and an ‘exotic’ locale (compared to those in typical crime novels published in the US). The other succeeds far stronger, so look for its review coming soon.
–

Disclaimer: I received a free advanced reading copy of this from the publisher via the Goodreads First Reads program in exchange for an honest review.