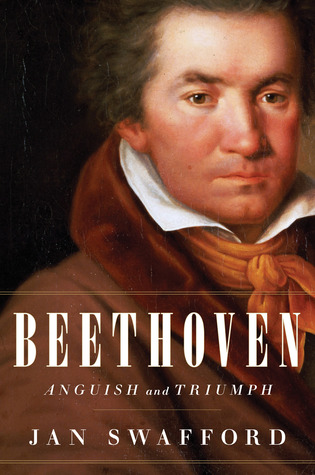 Passing a whopping 1000 pages (okay, around 900 minus the extensive endnotes) this Beethoven biography just kept me enraptured. Enough that I kept lugging the hardback to read at the bus stop and on the bus into work each day. Getting into work I began back diluting cultures to the compositions I had just been reading about. From this you can tell that Swafford has written a readable and inspiring biography of the Ludwig van.
–
Covering the totality of Beethoven’s life, Swafford also nicely givens contextual background from what is known about his immediate ancestors to the cultural and historical events that swirled around both locally and internationally. At times the biographical details on Beethoven’s benefactors seems a bit too detailed, though they are mostly discussed to highlight the ups and downs of Beethoven’s support, why he was appreciated by the upper class of the time and the limits of even their lifestyles to continuously supply patronage.
–
What really makes this lengthy biography work is that it isn’t merely a biography of Beethoven the person, but also Beethoven the composer in the sense that a good amount of space is spent both describing the process by which his major works were created and critique of the music itself. Swafford nicely attempts (and largely succeeds) at taking a step back from the long history of viewing Beethoven as a genius to to look objectively at his achievements.
–
For fans of classical music, serious or just vaguely familiar, this biography and discussion of his music will probably be appreciated. The musical analysis was at times more advanced than the basic music theory/history I was familiar with, but Swafford also does a fair job of explaining so that even the non professional musician will understand the main points, and a newbie will likely learn some wonderful things about music in general and about distinctions between different approaches (eras) of what is all lumped together as ‘classical’. In addition to covering the style of Beethoven’s output, Swafford also covers the basics of his contemporaries, particularly those he learned from.
–
If you are thinking about reading this but aren’t sure whether to commit to such a large work you can get a fair idea the whole thing by just reading a few chapters (interspersed with listening to some recordings I’d recommend). The first couple chapters are more laden with biography compared to a larger amount of musical focus further in, but you should still get a fair idea of Swafford’s scope and style.
–

Disclaimer: I received a free advanced reading copy of this from Houghton Mifflin Harcourt via Goodreads’ First-Reads Giveaway Program in exchange for an honest review.

Barely reaching 200 pages, “Asunder” is a short novel and a quick read, but it will linger in your memory long after completing those pages. Its length is ideal, because it has precious little plot to stand upon, and a character who is largely defined in her commitment to inaction. Instead, Aridjis fills her pages with richness of mood, with a style that ends up conveying themes in place of a plot that would more commonly be employed.

Yet, to say this novel is all just an exercise of style over actual substance rather does it wrong. It is literary, but is not weighed down in any sort of self-aggrandizing complexity. The style isn’t put in to show the reader what Aridjis is capable of, but serves to accurately portray the character she has created to touch, subtly and briefly on topics of humanity.

The inaction of Marie, the protagonist, is enough to cause some readers to tear their hair in frustration, I imagine. Those that want a character to progress step-by-step into a better life, into a romantic relationship, etc, will be left wanting. Instead Aridjis flirts with these reader expectations, creating throughout a mood of unbalance, of something being on the edge, ready to tip over into some kind of catastrophe, hell, even some kind of activity. This all is embodied perfectly in the character of Marie, a guard who presides over the artwork at the National Gallery in London, spending her days in silence watching the same rooms, the same works, and the varied people of the world who flitter through, a tedium of inactivity and observation. During her times off she creates art of her own, or wanders the streets of London, watching while even off work, resistant to change despite the passage of time.

Hence, the resolutions don’t happen immediately. They are continually delayed, up until the close and the heights of tension (for the reader and for Marie) are reached with a violence that is foreshadowed in events of the past. Throughout the novel this overall construction is patterned in many short sections of the narrative. We follow Marie’s thoughts or routines at work or in London as they build towards something. We read on, expecting the paragraph to end with a conclusion, some clever combination of words that summarizes her current state of character, or prewarns where she is heading. But, we find those lines aren’t there. The paragraph has ended, the chapter has ended, with Marie still apparently in midthought, or yet again firmly in a state of doing nothing particularly new.

I fear that I make this all sound terribly boring, when the novel is anything but. They are different beasts, but it is somewhat like saying Seinfeld is a show about nothing, but is hilarious nonetheless. This is a book about a character named Marie that finds it hard to move past what she is, where she is in life. Yes, somethings eventually do happen, but you have to read to the end to get there. The beautiful journey on the way makes it worth it.

This is also one of those rare books that I think I would actually prefer as a film. Despite the deceptive simplicity of the writing, its frequent moments of beauty, and its perfect synchronicity with the character of Marie, I feel so much could be conveyed even more though images in the hands of the right director. That this could so easily inspire a transition from one medium to another speaks volumes to me at how artistic and special this novel is.

Four Stars out of Five

The announcement that Alice Munro won the Nobel Prize for literature came as I was reading this new collection, right as I was about to start her story within it. I began it with some trepidation, because I have yet to read a story by her that I enjoy or appreciate (though I have only read a handful), and again, I found it hard to keep my attention within it. I felt this way about several stories in this year’s collection, with a few exceptions none seemed particularly strong.

Oh they are all good. And I know that Munro writes expertly. But they aren’t what I would consider the ‘best’. The story by Millhauser disappointed most severely. I typically adore his stories because they are filled with a certain magical wonder and tackle themes commonly present in sci fi or fantasy. The story here however, alternating between a Biblical retelling and a writer’s insomnia felt abnormally excessive and flat with a melancholy in place of the wonder I expected.

The stories I most enjoyed were “The Provincials”, “Malaria”, “Magic Man”, “Miss Lora” (my awaited intro. to the popular Diaz) and “The Tunnel, or the News from Spain” the latter one I previously enjoyed in Glimmer Train during its initial publication. This year’s editor of this collection, Strout, comments that the stories picked are united by having strong voices that are true to the characters and the time/place those characters find themselves in.

That is absolutely accurate, and I enjoyed these stories for precisely that reason. The other stories she picked have that quality, but simply are not voices I found that compelling or cared to hear much from. This was most evident with Saunders’ “The Semplica Girl Diaries”, a voice I found painfully awkward and dull to read.

Like each year’s collection, one isn’t going to love every choice. Strout met her criteria for inclusion, but those criteria leaned a bit too heavily on style over substance or enjoyment for the reader giving the 2013 edition a bit more narrow of a reader base that will adore it.

Three  Stars out of Five