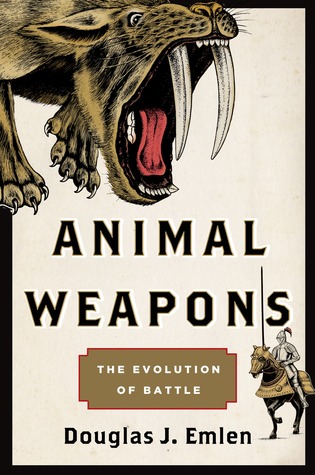 This is an engaging pop sci look at the evolution of morphologies and behaviors that influence conflict in animals. Why can animals display such starting traits of aggression? Why do some species have such stunning features like the teeth of sharks, the tusks of an elephant, or the elaborate, varied horns of beatles? These features seem to often defy logic. Sucking an exceptional amount of precious energy from the animal, conflict and the ornamentations associated with it (defensive and offensive) seem to evolve in some species to absurd extremes that shorten an animal’s life span.
–
Emlen explains how such traits and behaviors evolve, and why. The simple answer for the latter is what drives evolution of any characteristic. Those with the genes to produce the characteristic have better reproductive success – of passing on those genes to the next generation.
–
Chapter by chapter Emlen describes particular cases observed in animals where evolution of defensive or offensive traits is evident. Tying these to a human metaphor of war and technology, Emlen draws parallels between what is seen in biology and what is seen in human history in terms of weapon and armor development.
–
In terms of the science I am a little disappointed in the focus on animals alone. The weapon metaphor could certainly extend through all of life, with more interesting and varied examples. Moreover, the evolution of battle long predates animals; he really is only covering a tiny recent set of biological developments in this realm. But Emlen’s expertise is in animals and that is the group of organisms that everyone is most familiar with, so okay.
–
I did appreciate the basic history of human developments in battle that Emlen used to compare with the biological examples. The battle metaphor begins to stretch a little though with the close of the book which begins to postulate on how the future of human developments in weapons could lead to unavoidable catastrophe. This is certainly true. I am not convinced that biological systems of evolution are good proof of this however. Biological evolution is not the same as the ‘evolution’ of technology. The selection for weapon-like traits or battle-related behaviors in animals is not the same as in human war. While it makes for a catchy close to the book, it isn’t accurate or particularly meaningful, beyond a play on emotions.
–
Though I feel there are some issues with this book in taking very precise scientific concepts and trying to popularize them to a general audience, for the most part I think Emlen does well and would recommend this to anyone with an interest in biology or nature.
–

Disclaimer: I received a free copy of this from the publisher via the Goodreads First-Reads program in exchange for an honest review.

One thought on “ANIMAL WEAPONS: THE EVOLUTION OF BATTLE by Douglas J. Emlen”