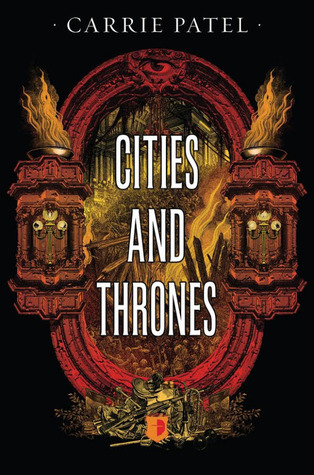 I purchased Carrie Patel’s The Buried Life in anticipation of an advanced reading copy of this sequel, and after reading that first volume set-up of Recoletta I was intrigued enough in the story and invested enough in the characters to continue. Yet, I also hoped for some changes. The Buried Life is a combination of post-apocalyptic steampunk with a police procedural. The procedural, or mystery, component to that novel appears dominant as the novel begins, but any expectations for the narrative to continue in that traditional genre vein become shifted as machinations in the background shift the protagonist from trying to solve a mystery/crime to something far larger, sudden political shifts.
–
The Buried Life introduced the post-apocalyptic setting of a deteriorating, underground city named Recoletta. Inspector Liesl Malone and her partner Rafe Sundar go against an antagonistic city bureaucracy to investigate the murder of a renowned historian. Probing into the lives of the city elite, Malone catches the interest of mysterious Roman Arnault, a complex man whose allegiances and intentions remain guarded. Meanwhile, events draw Jane Lin, a laundress who serves the upper class, into the investigation and she in turn draws involvement of her reporter friend Fredrick Anders. This investigation unravels, or blows up, to toss these characters into a turmoil that picks up here in Cities and Thrones. While Malone remains in a new Recoletta to try and maintain order amid the chaos of political change, Jane and Fredrick flee the city for the world above, a Communes that operates far differently than the existence they’ve known.
–
The twist in the dominant flavor of that first book from procedural mystery to larger scale political intrigue and conflict was unexpected enough to be jarring, awkward even though my brain told me that I should appreciate subversion of a reader’s comfortable expectations. Even accepting that twist however, I felt so much of the ‘screen time’ had been wasted on setting up what now seemed to be Patel’s real story for Recoletta, the events that would continue in the second volume. I would have favored less of the mystery set up for more of the conflict and intrigue that bursts to the surface. For that reason I enjoyed this second volume, Cities and Thrones, more than its predecessor. It spends its entire time on the characters within the political intrigues of their post-apocalyptic world. The characters still evolve, the story still holds surprises, but unlike with The Buried Life, the kind of story you feel Patel is telling here doesn’t change on you midway.
–
Not all readers of the Recoletta series will agree with me completely on this of course. Some I know really liked the mystery element to the first novel. I originally had planned on reviewing Cities and Thrones for Skiffy and Fanty. With my delay in being able to writing something up, my reviewing colleague Paul Weimer beat me to the punch. I could offer an alternate view there in theory, but I really have to agree with much of Paul’s reaction to the novel, which he seems to have enjoyed about as much as I. I encourage you to read it here. His only significant criticism with Cities and Thrones is summed up with this:

“For better or worse, the murder mystery in The Buried Life gave the novel a skeleton and a roadmap of a plot on which the author hung her worldbuilding, politics and everything else. That skeleton was sometimes too thick, and the things hung on it too thin for my taste sometimes, but it was an effective template nevertheless. Without that murder mystery as a skeleton, this novel has something of a structure problem.”

I won’t disagree with these perceptions of structure and pacing in Patel’s sequel vis à vis the first novel. But for me the sense of chaos within the plot’s structure and pacing here actually enhanced the novel. It seemed to perfectly fit with the uncertainty at all levels of the character’s predicaments and society.
–
As in the first novel, Cities and Thrones is mostly concerned with political and economic power, with class structure and divisions. Without a murder investigation surrounding it all, Patel seems more free here to explore these themes. Malone struggles with moral ambiguities between freedom and order, while Jane in particular tries to navigate an entirely new world and way of surviving. They discover truths and strengths, and some personal weaknesses. Patel excels best with forming these two female characters. The males who hold their interest, Roman and Fredrick respectively, are both also complex, but as more expected ‘types’: a mysterious rogue, and the loyal friend. Jane and Malone both show more diversity and unique shift in what ‘type’ their character inhabits as the story continues.
–
I am looking forward to the next volume in this series, mostly because I find the characters exceptionally fascinating from their ambiguities and imperfections. I don’t know as I’m that invested in what particularly ends up happening to their world or society, as much as I want to see what choices they make, where they go next. With the second novel I felt that Patel has gained surer footing in her construction of the novel, though others may disagree. But for either side of opinions on that, I think that most readers have still enjoyed her building story of Recoletta and its environs.
–

Disclaimer: I received a free electronic advanced reading copy of this from the publisher via NetGalley in exchange for an honest review.