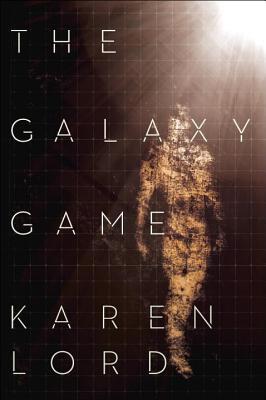 If you have read and enjoyed Lord’s The Best of All Possible Worlds, then you should be eager to read her new The Galaxy Game. If you haven’t read her previous novel set in the same universe as this one, then you should go and read The Best of All Possible Worlds. I wish I had, and despite the flaws I see in The Galaxy Game, I’ll starting back at her earlier work and eventually rereading this one again with a bit more familiarity under the belt to guide/support me as a reader.
–
The Galaxy Game presents itself as a stand-alone novel in its plot (which it truly is), and I had every expectation to adore it as my introduction to Karen Lord’s praised writing. Indeed there is a lot here to affirm that she has exceptional writing talent, and interesting, unique things to say. Unfortunately her writing fails in easily reaching a new reader in the case of this novel, its multileveled complexities obscure its worth.
–
The plot of the book is rather straightforward and doesn’t really hint at the strengths of Lord’s writing that lie beneath it: her language and her universe building. The heart of the novel is a teenager with psionic powers named Rafi. For historical reasons within this universe, societies largely mistrust these powers and Rafi is effectively kept ‘prisoner’ under government watch at a special school. While he lives a normal teenage life of close friendships and hobbies, the looming responsibilities of adulthood, pressures from his family, and uncertainty over his powers all hover over his daily routines.
–
Most of this plot exists as a slow build, a nuanced character study that begins to reveal key aspects to Lord’s universe in these novels. Though with a teenage protagonist on a seemingly standard coming-of-age journey, this is far from a young adult book. After a tantalizing prologue, I stepped into this story eager to go along, not really minding that it proceeded so slowly. What I did mind, was that Lord seemed to assume so strongly that readers were familiar with her universe, how it is set up, what the people are like, who different players are. Very little is offered to give a reader bearing.
–
Alone this might not be a death toll. Complex, subtle novels can work tremendously, even rushing in without firm footing. However added to the assumptions of familiarity and the slow, meandering plot, Lord additionally writes her interesting themes into yet another layer of complexity: multiple points of view. Thankfully these are limited to mostly third person and a first person, but the similarities of third person voices (particularly early on as you are trying to get used to everything), make it hard to tell who is speaking.
–
Eventually, circumstances force Rafi to flee to a planet where his psionic abilities are far more common, and appreciated. Despite being in a more familiar, accepting environment, Ravi discovers this planet and society comes with its own challenges, one society amid a shifting galaxy of politics, and games.
–
For all the befuddlement that may befall a reader, The Galaxy Game does have some elements that make it stand out, beyond to beauty of the prose and the interesting sociopolitical commentary at play. Sports pops up in science fiction from time to time, but not too frequently. Lord combines the psyonics with a sport called Wallrunning, one aspect of her world building here that did seem evocatively described, and some of my favorite moments from the book were the parts featuring this. Another great element is simply Rafi. Perhaps it is partly the empathy the reader can sort of feel with Rafi at being out of place, lost, in this society, but parts from the point of view of Rafi (and to a lesser degree his friends) are the closest to familiarity I felt while reading this.
–
Other reactions to The Galaxy Game seem similar to mine. For instance Sunil Patel’s contribution to the new review section of Lightspeed Magazine echoed well many of my own frustrations with seeing so much potential here, but not coming away really fulfilled.  On the other hand, writing for NPR, Amar El-Mohtar had a much more positive reaction despite recognizing the challenging nature of this novel. Aside from differences arising from familiarity with The Best of All Possible Worlds, another factor that I realize may significantly alter one’s perception of the The Galaxy Game could be the format in which you read it. El-Mohtar speaks in her review of needing to flip back to pages previously read. I would have loved the capability to do that, but having an electronic copy alone, this wasn’t possible (well at least not very facile). So get the physical copy if at all possible if you give this one a try.
–
One final point: in struggling to put my thoughts over this novel into words I did also listen to this fantastic, fascinating interview that Skiffy & Fanty did with Karen Lord on The Galaxy Game. Whether you to decide to read the novel or not (or if you already have read it), I think it’s well worth a listen.
–

Disclaimer: I received a free advanced reading copy of this from Del Rey via NetGalley in exchange for an honest review.