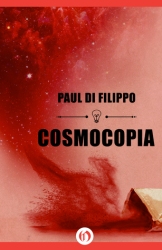 In Paul Di Filippo’s review column in last month’s issue of Asimov’s Science Fiction Magazine he mentioned his novella Cosmocopia as an example of ‘posthumous fantasy’, a subgenre description that I hadn’t heard before, though I have certainly read. Stephen R. Donaldson’s Chronicles of Thomas Covenant come to mind. With the novella length, Di Filippo effectively focuses his exploration into a few basic themes that the genre can embody.
–
Frank Lazorg is a former talented fantasy illustrator whose artistic productivity and physical vitality have vanished from a stroke in his old age. His desire to achieve one last glorious creation prior to death seem within grasp, however, when a friends sends him a pigment extract for his paints that turns out to also be a potent, reinvigorating drug. Unable to resist the potential it provides, Lazorg takes the addictive, mind-altering drug. Augmenting the emotional turmoil of his past memories, and the fragility of his present, the drug pushes Lazorg into madness and tragic violence that ends up shattering his reality. Lazorg awakes, perhaps transferred, perhaps reborn, in a place familiar yet bizarrely different in biology and physics, perhaps with another chance at life.
–
The characters and the behavior of physical reality in the universe where Lazorg finds himself are vividly, imaginatively written by Di Filippo. Lazorg is forced to discover this familiar – though foreign – world along with the reader, and stumbling through his new life as he attempts to discover and outlet for his talents and rekindle the artistic creation he yearns for. And the reader begins to increasingly sympathize with Lazorg, who despite his monstrous actions, you want to see find personal redemption in his new lease on life. Despite his mistakes and selfishness, you see the touching love and devotion of those he now finds himself among, and how that has the potential at least to change him into something redeemed.
–
At the core, Di Filippo uses this posthumous fantasy set-up to explore those basic issues of life and death: Where do we go when we die? Is there an afterlife? Are we reborn? Are there other universes out there? Do we migrate life after life, closer and closer to some ultimate meaning, to a cosmic truth? Is there someone in control and if so do they deserve our respect, or our ire?
–
This novella isn’t about answering any of those questions, it is just about providing a weird journey that addresses some of these in a narrative to get you thinking about them. I don’t want to say too much about what happens to Lazorg in his new environment, or where he goes from there. I don’t want to reveal what the new world appears to be, because that would ruin the fun of reading this, or of coming up with your own interpretations. I personally found the ending to be perfect, perfectly ironic. If you missed out on this when it was first released as I had, I do recommend picking up this newly available ebook version to discover this.
–
Disclaimer: I received a free advanced electronic reading copy of this from Open Road Media via NetGalley in exchange for an honest review.