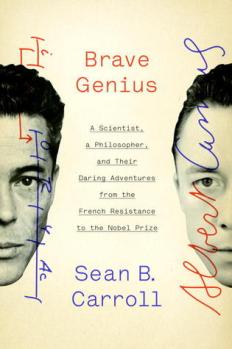 Brave Genius: A Scientist, a Philosopher, and Their Daring Adventures from the French Revolution to the Nobel Prize, by Sean B. Carroll
Publisher: Crown Publishers
ISBN: 0307952339
592 pages, hardcover
Published September 2013
Source: Goodreads First-Reads

Having focused on biology and French in college, I was obviously intrigued when I saw the description of this book. Amazingly I hadn’t realize the wealth of connections between these subjects that intersected in the decades from World War II to the Cold War. The achievement of Carroll’s book is that he is able to merge disparate forms into one cohesive, enthralling, and compulsively readable volume. A combination of biography, military history, literary/philosophical history, and science, Carroll somehow makes it all work, focusing on the lives of Camus, Monod, Jacob, and others. Mostly these stories are physically separated, coming together in time and space only briefly. Yet each individual’s separate story is linked together by shared global experiences of political and social strife and coming each, individually to a personal philosophy and pursuit of some passion for their own personal betterment and the benefit of their fellow humans. Camus’ story in terms of his journalism, literature, and Existential philosophy is the most widely familiar, but strikingly similar to the genius and passion displayed by Monod, Jacob, and others through their pursuit of science. For anyone interested in literature, science, or the history of World War II, this is a book I would seek to devour. What sets it apart from a mere history of compelling characters is the inspiration it engenders to fight against situations of injustice and concern that you may see in the world, giving an applicability that transcends any particular historic period or society, one that you can easily see reflected in many issues of politics, science and culture today.

Five Stars out of Five